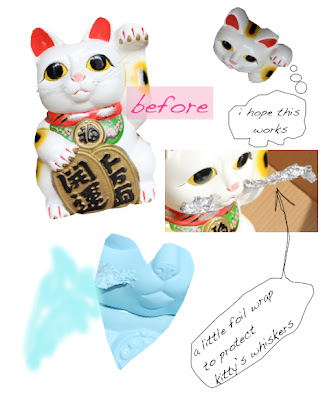 This is Maneki Neko or Beckoning Cat, known here as just Kitty. I found him in an ordinary shop on an ordinary street in my neighborhood. After weeks of beckoning me from the storefront where he sat, I finally caved-in and bought him for ¥1,500 ($15), which I consider a bargain. It turns out he's a piggy bank, too. (Or would that be a kitty bank?) So he's actually going to help me SAVE money. How 'bout that?
When my husband came home and saw him sitting on a shelf he was kind of shocked. Kitty is pretty big, about a foot and a half tall. My husband thought he was too old fashioned and not at all cool. I have to admit, his coloring was a little garish considering his large size. I promised I would make it all better with some spray paint, but secretly wondered if I'd made a mistake bringing Kitty home. 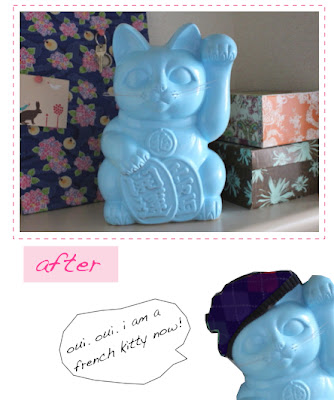 Now Kitty sits in the genkan and multitasks as a greeter/good luck bringer/bank/occasional hatstand. I think he's looking très chic in pale blue (and my husband was also pleasantly surprised).
Labels: decorating DIY My Place zakka