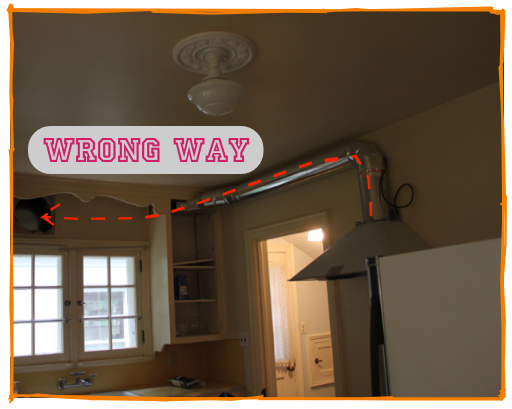 The kitchen renovations have just begun and I've already encountered my first design crisis. We're not doing too much here for now -- new appliances, updated electrical, updated plumbing and adding a range hood that vents outside the house. Later, we'll do floors, replace countertops, add a tile backsplash, put in built-in seating and cabinets around fridge and next to range. Right now, it's the vent that caused me to loose sleep the other night.
Previously, the only ventilation in the kitchen was through a little fan in the wall above the sink. It's all grimy and I'm not even sure if it worked. Way before we started seriously looking for a house, I had my heart set on a stainless steel range hood. It was the first thing I ordered for the kitchen.
After a chat with the HVAC guy, he told me he would have to spend about 4 to 6 hours to hide the duct inside the wall, so that it runs invisibly to the outside of the house. I did the math, and figured that having a nicely vented kitchen with a cute rangehood would be worth it.
But when the guy showed up, he told me (after about an hour of poking around) that there's not enough room in the walls for the duct. He could "rip open" the ceiling and see if it would fit in there, but that would take a couple of hours and might now work either.
Hearing the words "rip open the ceiling" made me nervous. With great hesitation, I agreed to Plan C. Have the duct run outside the wall and through the cabinet. Then have a carpenter build a soffit to hide the duct. Of course, he'd have to do some work on the cabinet doors, too. Then there was the electrical work that had to be done where that pendant light hangs over the sink. The light would be in the way of the duct, so it would have to go and a new box would have to be installed for a different light. 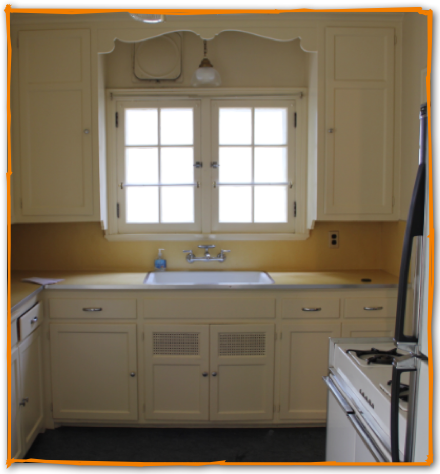 With this Plan C, I would lose, or at least really mess up, the adorable kitchen cabinets that I love so much. PLUS I'd have to have a soffit. I hate soffits. I'm sure they look OK is some kitchens, but the reason I liked this one so much was because the cabinets go all the way up to the ceiling instead of meeting up with a soffit, which just looks like waisted space to me.
The plumbers and electrician all assured me that a good carpenter would have a solution. I wasn't so convinced and as soon as my beautiful cabinet door came off to make room for the duct, I started to have serious doubts. I considered returning the rangehood and range that hadn't even arrived yet. A range with built-in downdraft would be easier to vent through the floor. But I'd already searched for that type of range and didn't find anything I liked.
Luckily, the HVAC guy called it a day at 3 o'clock. Before he came back, I had a carpenter (who also happens to be a designer/builder) come and take a look, hoping he would have some genius solution that would make me feel like everything would be OK. Instead, he just stared at the walls and went, "huh." He told me, as I feared, that if we went forward with Plan C, my cabinets would always look weird.
So he came up with Plan D: Go straight up through the ceiling and through one of the bedrooms upstairs and then out the roof. With this plan, there will be a small column in the bedroom to hide the duct, but that I can live with.
So my first design crisis is over. Now I can move on to stressing out about a couple of other issues involving plumbing and masonry work. But I made a promise to myself not to stress out too much. Mostly, I just want to enjoy the feeling of being a homeowner for the first time. So I'm going to try and sneak a peak at a decorating magazine before heading out to the girls' Japanese Saturday school. Who am I kidding? There's no time for magazines. My husband already left this morning to rent the big sander again. Refinishing the floors ourselves is turning out to be more than just a part-time job. Hubs is at 40 hours already this week.
p.s. Notice the clunker of a fan came down and was replaced with a new light. I just have to paint that medallion, but getting rid of the fan has made a huge difference.
Labels: decorating design interiors kitchen

Vanessa said…
Yes, well the company I hired to do the vent was also a professional HVAC/Plumbing company and that didn't get me anywhere. haha.
October 17, 2011 at 4:12 PM