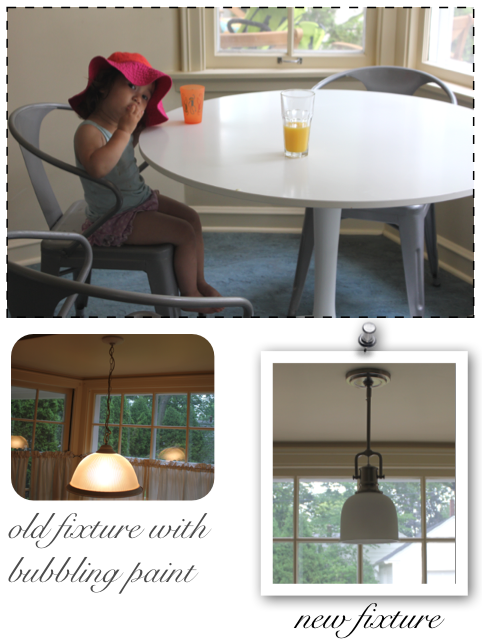 Things are coming along in the kitchen. We started out thinking that we would just replace some light fixtures, take out the fan and replace appliances. But it turns out that we were forced to start cabinetry building sooner rather than later. A few weeks ago, I mentioned that I bought a slide-in range with panels so that it could stand alone without cabinets. The problem is (despite what I read online and what the salesman told me) panels do not make the slide-in (at least the Fridgidaire model I got) freestanding. The panels still leave a gap where countertops are supposed to slide in and there is a 2" gap between the back of the range and the wall.
I really didn't mind going ahead with the custom cabinets to match our existing cabinets which are original to the house. This was kind of a fun project that I had already planned out before we moved in. 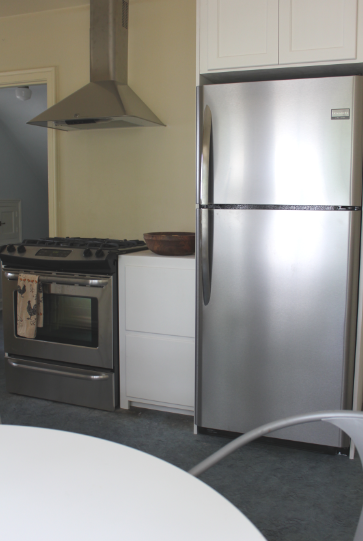 We still haven't installed countertops, so that is next on the list (along with a subway tile pattern backsplash). I wanted to do a cheap DIY butcherblock top from Ikea on the new cabinets only, until we can afford to replace all the countertops. But the butcherblock is out of stock for at least 8 weeks. That means we now need to move ahead with countertops sooner rather than later, too. But again, spending money on coutnertops is a lot more fun than paying for plumbing fixes (which turned out to be not as extensive as we thought). And I think I've found a really good deal on honed black granite. 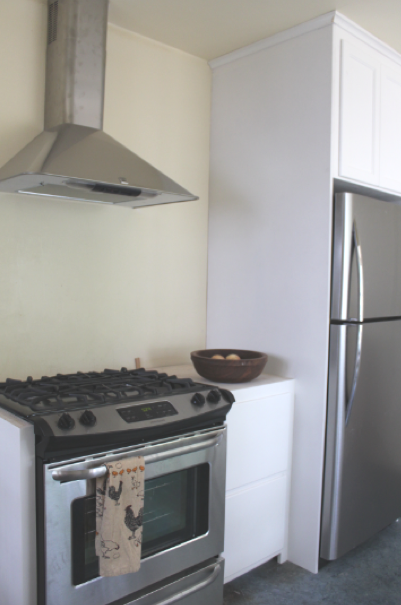 Instead of the standard shallow pull-out drawer and bottom door, I had the carpenter build two 14" deep drawers for pots and pans. You might notice the pulls are missing. That's because I have to decide on some. The wood is also primed only and not painted because I have to decide on a color.  Right now everything in the kitchen (walls, cabinets, ceiling, molding) is this off white/yellow color that bugs me. The cabinets above the fridge are super deep. So now I have more storage space than I have junk to fill it with. I'm sure that will change over the course of a year or two. 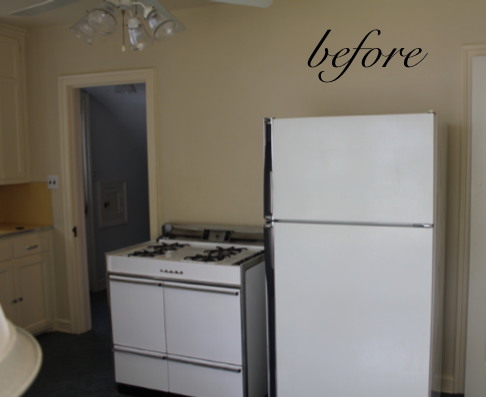 Here's a look at the old appliances. It blows my mind that this broken range has been sitting in the house for so long. I do think it's adorable, but it would have been expensive to restore and it was 40" wide which wouldn't have left me with any room for a cabinet. The smaller fridge and range that I chose left 18" for a countertop. So now I have a place to rest my ladle while I'm making my homemade spaghetti sauce with parsley from my new herb garden.
Labels: design kitchen