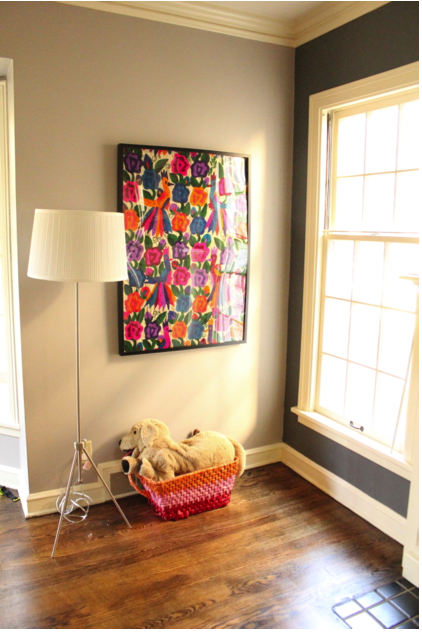 I read somewhere about a socialite who always takes a picture of herself before she goes out because a photo never lies. You could probably argue that with really good lighting and the right lens, a photo could tell a real whopper, but anyway... I thought I'd see if this might work with decorating, too, so I took a picture of a corner of my living room as an experiment. I don't have really good lighting or the right lens, making my pictures closer to the truth side of things.
First off, I have to say that this corner looks much better than it did yesterday when I had that black frame empty and just resting against the wall. No picture necessary to show that that wasn't working. I've seen people decorate with empty picture frames before, but they're usually cool, pretty frames, not like this cheap Ikea frame here.
The painting that I planned to hang didn't look right at all in the frame. The proportions were all off, so I thought I'd try this hand embroidered souvenir I bought in Guatemala just to see how it looked. I'm not 100% sure I want to keep it on display like this, but it will have to do for now. 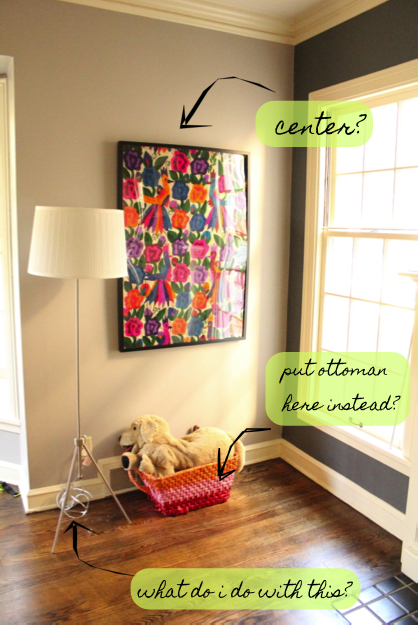 So, what's wrong with this picture? Here's what I've come up with so far...
#1. That lamp cord. It looks really messy.
#2.  I'm pretty sure a bigger basket would look better under the frame, but I don't have a bigger basket and I'm not going to go buy one, so maybe the ottoman I made would look good there. But then we won't have anywhere to put our feet when we're watching TV.
#3. The frame isn't centered on the wall because I was looking for a stud to screw into. Then again, maybe it looks better off-center to make room for the lamp.
#4. The plastic frame protector is popping out of the frame and it looks weird.
So it seems that taking a picture of a room, or just a corner, is an effective way of critiquing your decorating decisions because I hadn't noticed these problemos before the picture. But maybe it's just best to skip the picture taking stuff and live in blissful ignorance. One thing is for sure, I'm not going to start taking a picture of myself each time I step out. That is way too much effort to make on a daily basis!