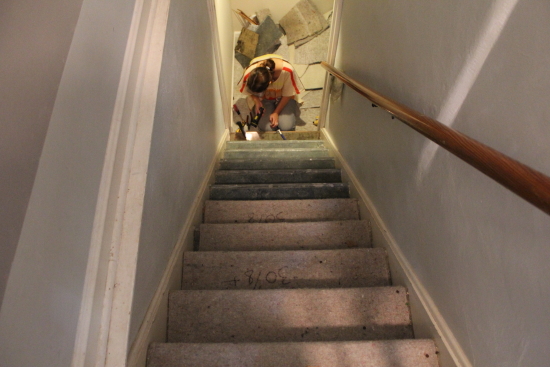 Alright so no one is more disappointed than me about this %$&%#=* staircase. I was sure than I would at least have the thing sanded and primed by this morning, but nooooooo. 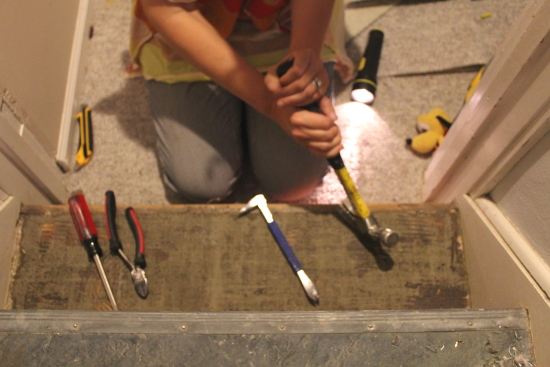 After finally getting the carpet pulled off, I began removing dozens and dozens of staples. At least that wasn't back-breaking work. Sort of the equivalent of pulling weeds in the garden. Ripping off carpet was like digging a deep hole in a garden bed .... when there are tons of tree roots everywhere. 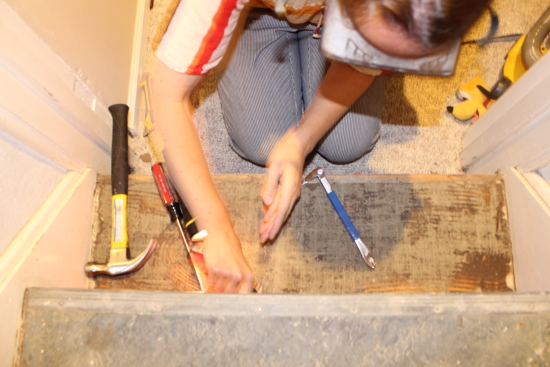 I thought things were finally going my way when the old linoleum peeled off with such ease.

But then things took a turn for the worse when I suddenly remembered, after pulling up three steps worth of linoleum, that some vinyl and linoleum flooring made before the 80s contained asbestos!!!

I flipped out, stopped production on the Stairway to Heaven and started looking for asbestos testing labs. I also realized that my $25 budget might easily inflate by about one hundred times that if I had to call in some kind of asbestos removal company. Have you ever seen that episode of Income Property when they find asbestos in the basement? Yeah, they have to give up a second bedroom or something to afford the removal.

Then this morning a plumber, who also happens to be certified in identifying asbestos, came by to look at the leak in our basement utility sink.

The bad news is that the sink has to be replaced.

The GOOD NEWS is that he is positive that there is NO asbestos in the linoleum flooring on the stairs!

Phew. So back to work on the stairs.
Labels: DIY

Millwell said…
Hi, I'm a doctoral Student at Appalachian State University working on my dissertation. I am studying craft practices among women and would LOVE it if you might participate. I have included a link below to a survey and description of my research. Please feel free to pass it on to other women artist/crafters who you know.
Thanks so much,
Emily Miller.
https://www.surveymonkey.com/s/craftonomics
August 21, 2012 at 8:14 AM

Anonymous said…
I am loving the posts on your stairway. You made me spit out my coffee laughing when I saw you called it the "#*%&" staircase! I am so glad to hear you didn't expose anyone to asbestos and sounds like the worst of it is over!
August 22, 2012 at 8:22 AM

Vanessa said…
oh good, glad you're enjoying my frustration! i'm taking a couple of days off the staircase project to focus on some other stuff. but i'm absolutely positive there will be some major progress done by the weekend!
August 22, 2012 at 9:07 AM