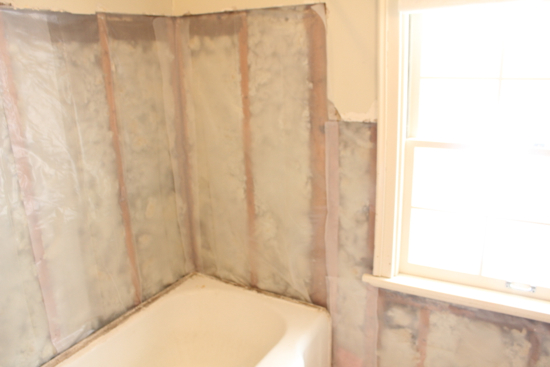 Nothing like taking a nice hot shower to get your day going ... Oh wait, we don't have one. 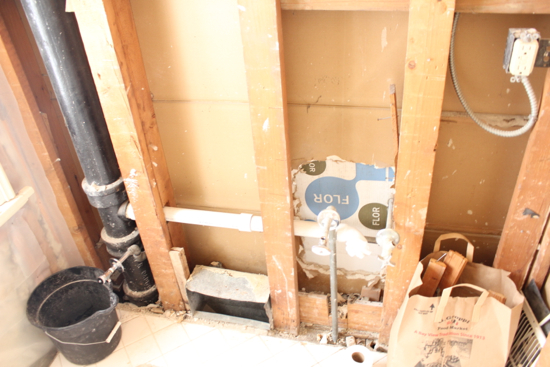 This is our only full bathroom in the house and, as you can see, it's been gutted. Not completely gutted, we still have the cast iron bathtub and the plaster walls above the tile are still there. 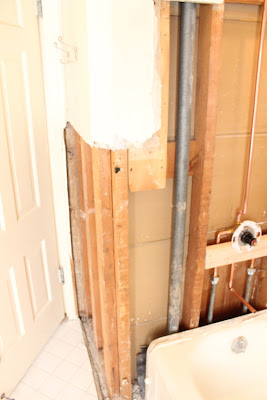 There's our tub with just a faucet valve and water pipe in place. I bathed the kids and myself in there last night. Not ideal because even a little splashing could cause a water stain on the ceiling downstairs. 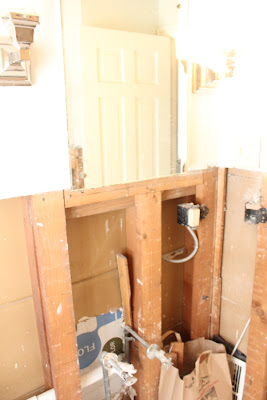 Today we're having a professional tile guy come and instal our marble hexagon tile floor and white subway tile pattern on the wall around the tub. If you've been through this kind of renovation, you know it takes several days for the tiling job to  be complete. Then the plumber has to come back and instal the finishes on the tub and put in the sink. We're doing the toilet ourselves so we can save a little cash. 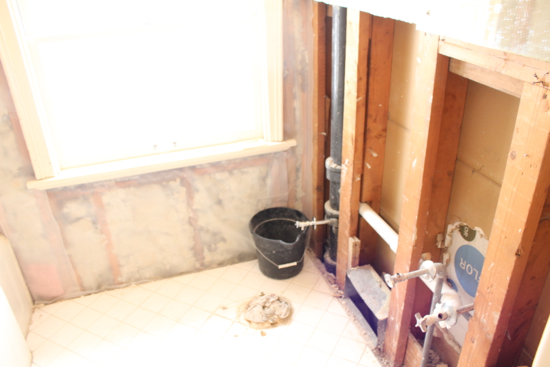 The new tile floor will go over the original tile. That's because the tile guy told us there is most likely a very thick layer of concrete under the tile and demo would be a nightmare. Speaking of a nightmarish demo... We'd planned to do the demo ourselves, again to save some money. But it turned out after what seemed like forever we got this far.... 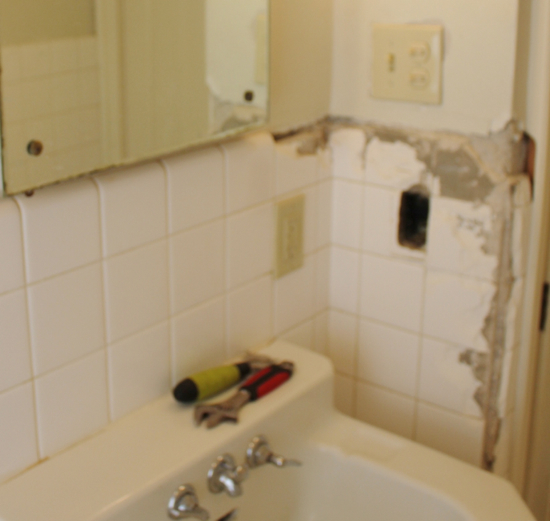 Turns out there's some very thick layers of concrete behind that tile. The tiles don't just pop out like we thought they would. They sort of chipped off in shards. We didn't swing anything heavy at the wall at this stage, because we knew it would be worth the money to just hire someone to do it. We did not go with the tile guy, though. His estimate for gutting was really expensive. Instead, I asked around and got the number for a handyman. He did an awesome job and charged a third of what the tile guy would have.

*I didn't use a general contractor for this job, because I figured we'd save some money if I coordinated the subcontractors myself. And we didn't have to open any walls. I know a lot of people do this, but I was a little bit worried about how the order of things would go. After asking a lot of questions, I figured out that it goes something like this:

1. Several months prior to start day: Easiest part: My husband and I looked at tons of magazines and websites and even went to Kohler Design Center to get inspiration.

2.  Two months - 3 weeks prior to start day: *We (instead of tile guy and plumber) picked out tile, breadboard, trim, toilet, sink and finishes, purchased them and inspected everything to make sure nothing was damaged. * We got 40% off the marble tile during Cyber Monday and went with cheap 3x6 white tiles for the wall.  *We saved our cast iron tub not only because it was cheaper to refinish than to replace, but we preferred the feel of a cast iron tub to the fiberglass models in our budget. You can buy new cast iron tubs, of course, but  they're even more expensive than fiberglass models. Also, schedule handyman, plumber, and tile guy (the second visit by the plumber has to be scheduled as soon as I have an idea when the tile guy will be finished.)

3. Saturday, Feb 5: Handyman came in and did the demo and hauled off debris, old toilet and sink. *The handyman charged a third of the cost of the tile guy for demo. We scheduled this as close to the tile guy's first day as possible, because this is our only full bathroom and gaps between jobs means we're out of a bathroom longer.

4.  Monday, Feb 6: Plumber came in to prep pipes for new faucet, shower head, and spout. He also replaced a very rotted drain pipe for the sink. That was a $50 fix that should be well worth the money, because the new PVC pipe will allow our sink to drain much faster. The plumber also replaced the old toilet and sink valves.

5. Tuesday, Feb 7 - Middle of next week: Tile guy comes and does his thing: puts a layer of Durock cement board over the vapor barrier my husband put up, gets the wall flush with the existing plater wall, tiles, grouts, seals, etc.
(takes several days)

6. Thursday, Feb 14: When tile job is complete and we can walk on floors, *my husband and I (instead of hiring a carpenter) will instal breadboard on the walls behind toilet and sink. Another romantic Valentine's Day.

7. Friday, Feb 15: Plumber comes back to put finishes on bathtub faucets and instals pedestal sink and faucet. *We will instal the new toilet ourselves.

9. Sometime in late February: My husband and I will put on the finishing touches like painting walls and putting a new mirror on the medicine cabinet. We're not going to rush ourselves with this stuff.

10. Sometime in February: I relax and take a nice, long, hot bath. But really I don't take baths that much, so probably a nice, long hot shower instead.

*Ways we saved a little (or a lot of) money.

Anonymous said…
OMG. It exhausts me seeing all the things you do at once. Hope you got really clean last night because it sounds like you will have to go without a bath for a couple of days while the new tile dries!
February 5, 2013 at 1:38 PM

Vanessa said…
Yes, I really want to take advantage of the local LaQuinta's $59 special for a couple of nights, but we may be using the basement sink instead : (
February 5, 2013 at 1:52 PM

Vanessa said…
I'm impressed that you're doing it by yourself. When I saw the problems the demo guy and tile guy ran into, it made me so relieved it wasn't me doing it!
February 7, 2013 at 7:42 AM

Unknown said…
This article is very good & informative.I have gain so much information from this blog.I like your blog.Thanks for the post.