Finding My Niche... Or Not 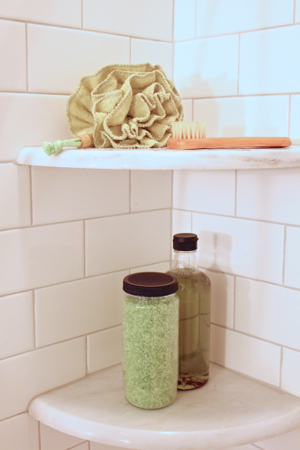 I'm waiting until next week to reveal all the bathroom remodel pictures. In the meantime, I thought I'd just mention one little compromise we had to make with our shower design. It had been my plan to have a double niche built into the wall to hold shampoo and stuff. Something like this picture I took at the Kohler Design Center, but smaller and two of them... 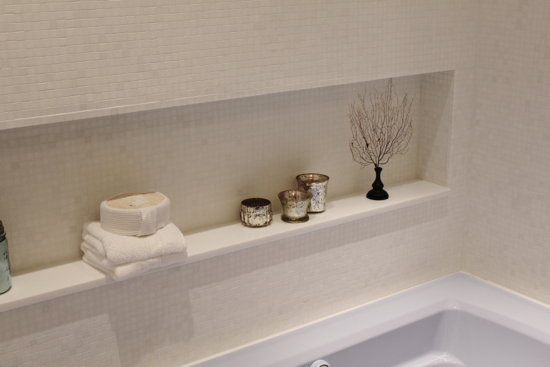 But it turns out our professional tiler did not approve.

Two of the three shower walls are exterior walls and our expert told us that there is not enough room to safely insulate behind the niche. As it turns out, the interior wall was too crowded with pipes. So no go on the niche. 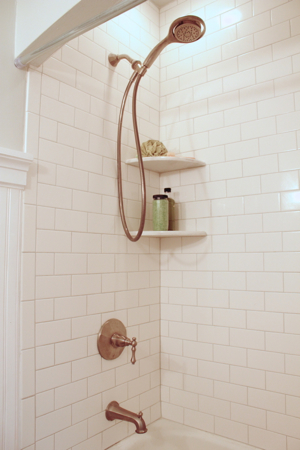 We went with those two Carrara marble corner shelves instead. Now that they've been in place for a few weeks, I've totally forgotten all about our Plan A niches. And the marble shelves tie in nicely with the hexagon floor tiles. I have to say, I'm really glad we went with a professional for the tiling phase. If we'd tiled ourselves, I don't know that we would have had the good sense to nix the niches.  Cancel the cavities. Abandon the alcove. Nullify the nooks.

Anyway. The moral of this post is: sometimes it pays to go with the pros.
Labels: bathroom renovation niche