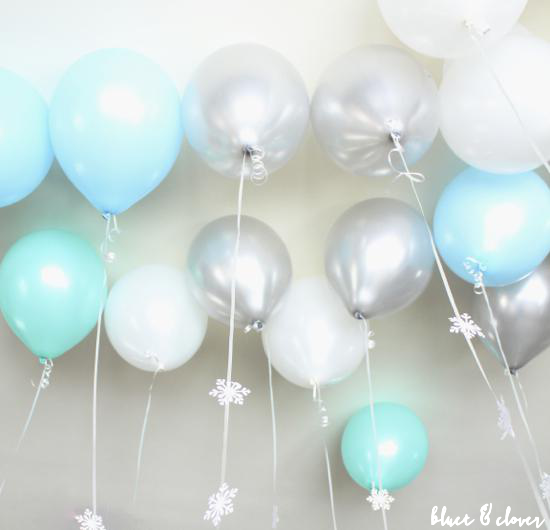 Saturday was the big day, my six-year-old's Frozen-themed birthday party. There were some big hits along with some major misses. I'm going to give you a rundown of it all and link to the recipes and how-to's later this week. Of course, I'll be posting details on the hits only.

And just to make things easier, let's rate these party elements with a scoring system. Red Hot (imagine kids jumping up and down with big smiles on their faces yelling "more, more!"), Hot (they're smiling, but maybe not jumping), Warm (there were some takers, but not for everyone), Cold (most of the kindergardeners walked away) and Ice Cold (wrinkled noses, furrowed brows, maybe even a yuck uttered here and there).

So we'll start with the helium balloons with snowflakes. Red Hot. I had these in the living room, so it was the first thing the kids saw when they came in. Most of the kids were asking right away if they could take one home. So if you do helium balloons, or as my four-year-old calls them hop balloons, make sure you get enough for each kid. 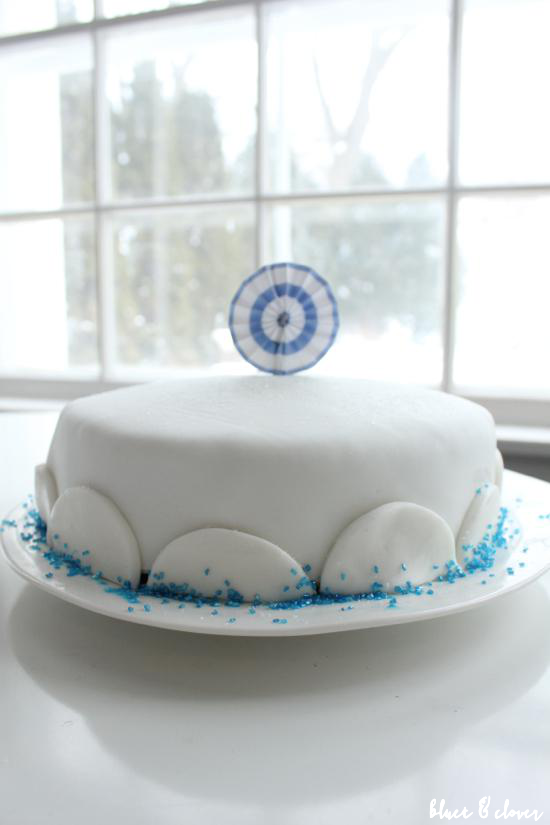 The cake. So this was my first attempt at using fondant icing. The plan was to cut out snowflakes and put them all over the cake, but my cookie cutter was nowhere to be found. So I cut out these half circles and made what I think looks like a very sophisticated wedding cake (minus the blue sprinkles and paper topper). If I were to rate this cake on looks alone, I would say it was Red Hot. The kids thought it looked really cool. But once they dug in, it was an entirely different story.

I'll admit it. I used one of those store-bought mixes: Betty Crocker Blue Velvet. It called for a stick of butter instead of the usual oil which I thought was a good sign. Honestly, I don't think the cake was the problem. They hated the taste of the fondant. I mean hated it. And, believe me, they let me know. It didn't help that I spread apricot jam in between the layers of cake. So if they did get past the icing, they were totally grossed out by the jam.

If you ask me it was delicious, but I'm not 6 years old am I?

So sadly, the cake was ICE COLD and I will wait at least 10 or so years before I make a fondant icing cake for my kids.

One thing I was very glad to have bought at the grocery store was little vanilla ice cream cups. I didn't get stuck filling 15 bowls of ice cream. Instead we just passed them out with spoons which took about 30 seconds. And at least they got some kind of dessert while the table piled up with uneaten slices of blue cake. 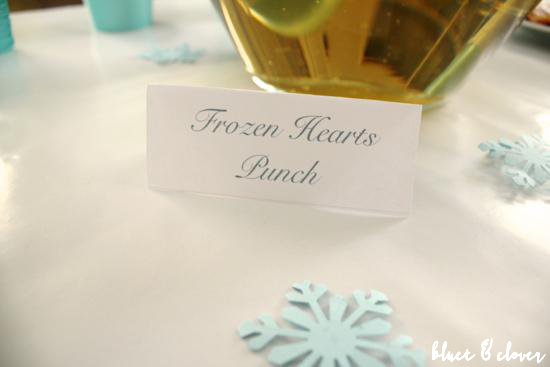 Frozen Hearts Punch. Red Hot. Smokin'. Someone get me a fire extinguisher!

They drank this down in a matter of seconds. OK, minutes, but you get the idea. And it was so simple. Hopefully, you can wait for my Frozen Hearts Punch recipe later this week. 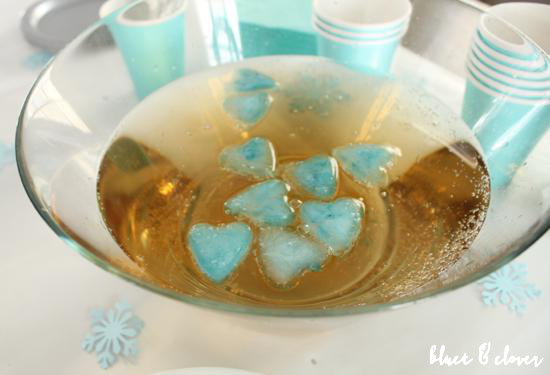 My personal favorite: Frozen Pizza. Red hot. What kid doesn't like pizza? Only my daughter and another kid got the joke. And my daughter only got it because I explained it to her a few days ago when I got the idea for our main course. Get it? Frozen. Pizza.

Yes, it was heated up. 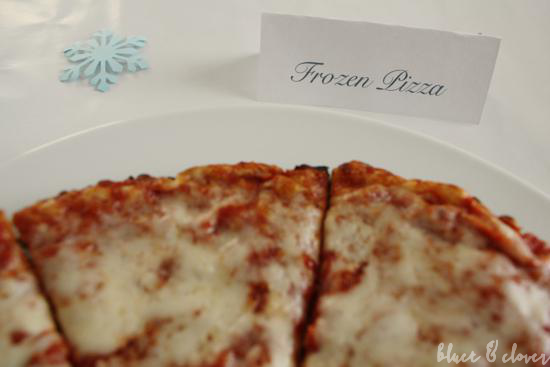 Melting Snowman Yogurt. It was a visual crowd pleaser, but only about a quarter of the kids dug in. I did make a mistake with the generic label. One little girl came up to me with a very serious expression and asked, "But that is Olaf, right?" So if you try this vanilla yogurt with raisin buttons and eyebrows (I used kitchen scissors to shape), pretzel stick arms, carrot nose and marshmallow and chocolate chip eyes, you might want to call it a Melting Olaf not a Melting Snowman.

I'm going to rate this Warm just because there weren't as many takers as I thought there would be. 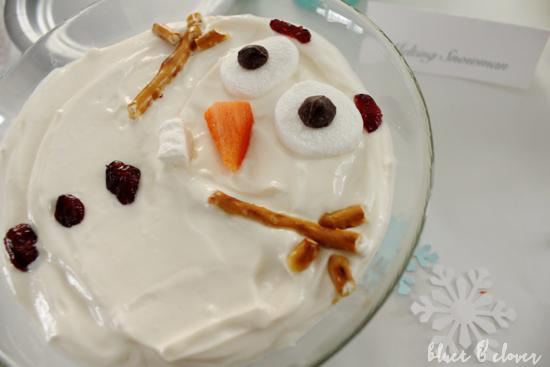 But he's just so cute! 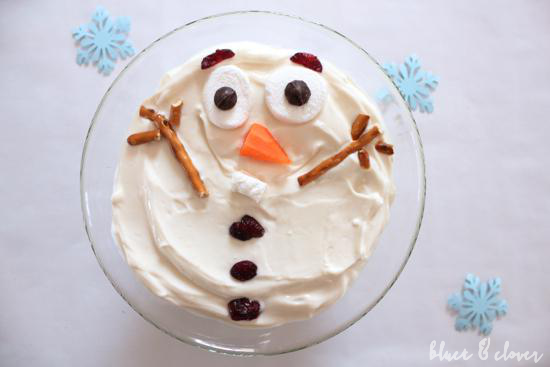 You may be wondering what I was thinking putting out a tray of veggies at a party full of 5 and 6-year olds. You know, I always see these Pinterest kid party tables just bursting with candy on top of candy. It makes for a gorgeous table, but do I really want a house full of kids jacked up on that much sugar?

So I thought I'd try a few healthier snacks. And besides, I came up with such cute names for everything!

Rating: Cold. The kids were amused by the appetizer names, but not enough to eat them. 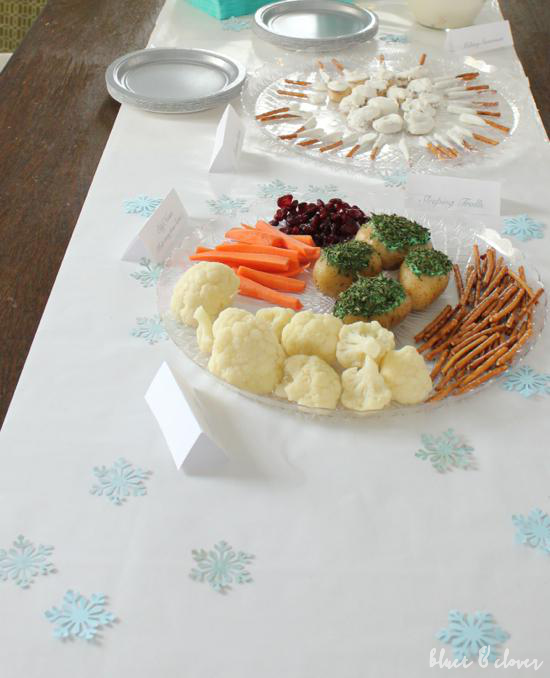 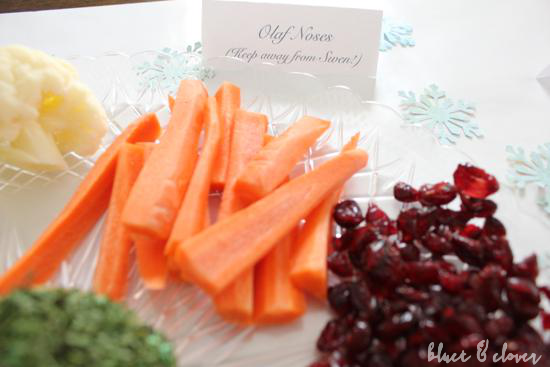 Sleeping Trolls! You know how they looked like mossy rocks before they turn into trolls? I thought tiny baked Yukon Gold potatoes with chopped herbs (stuck on there with sour cream) was such a good idea. One guest did ask to try a Sleeping Troll. I got so excited. I sat him down with a clean plate and placed a baked potato on there. He looked at it all confused and then pointed to the chocolate covered bananas and goes, "I thought those were the Sleeping Trolls."

Oh well, I had one less side dish to cook for dinner that night. My girls, for the record, ate them that night. 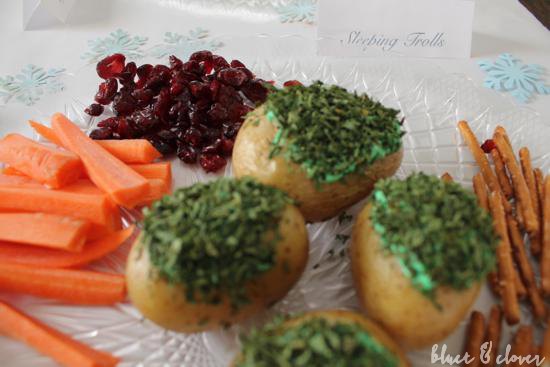 Snowy Trees. Ice Cold. No takes on that, but I still think it was clever. Pat self on back. 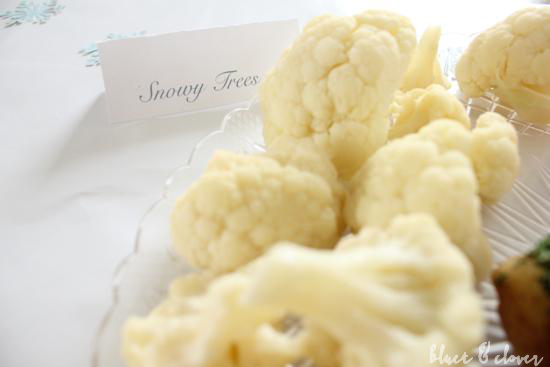 I probably could have come up with a better name for these, but the Snowy Sticks were pretty hot. The Frost Bites, not so much. Those were slices of banana dipped in white chocolate and covered with white sparkly sugar sprinkles. I thought they were pretty darn good, but I think the kids were suspicious. What was Party Mom trying to hide under all that chocolate? Broccoli? Spinach? 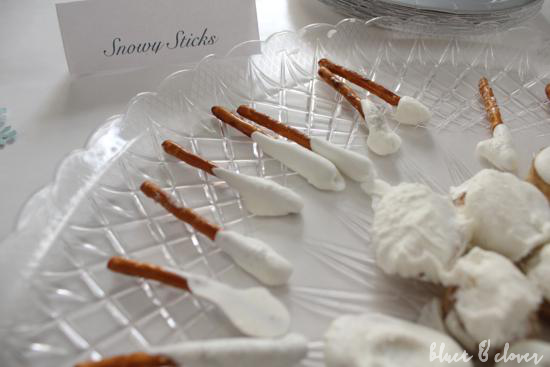 Table runner. Hot. Especially when some of the kids realized that the snowflakes weren't glued to it. A couple of the kids were excited that they could take a snowflake home. 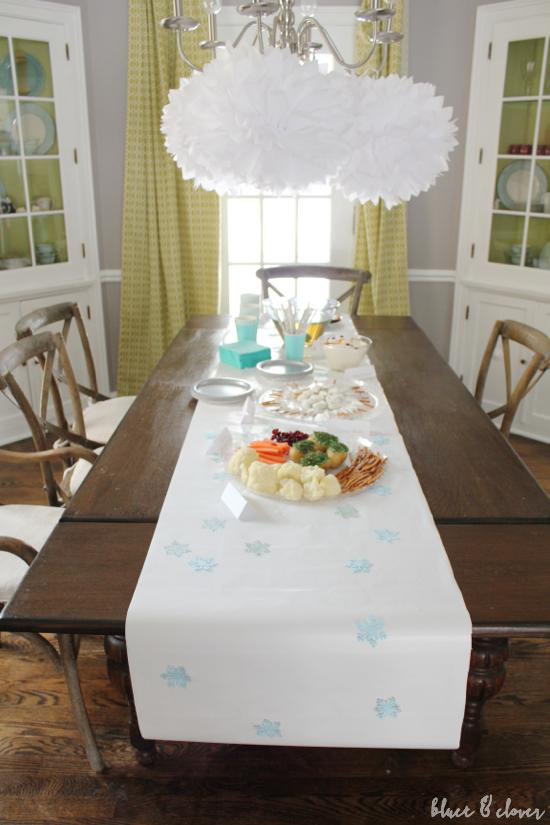 Silver paper straws. Red Hot. One guest asked if she could keep the straw and then tucked it safely inside her snow boot by the door. Hopefully, she doesn't try to use it again. 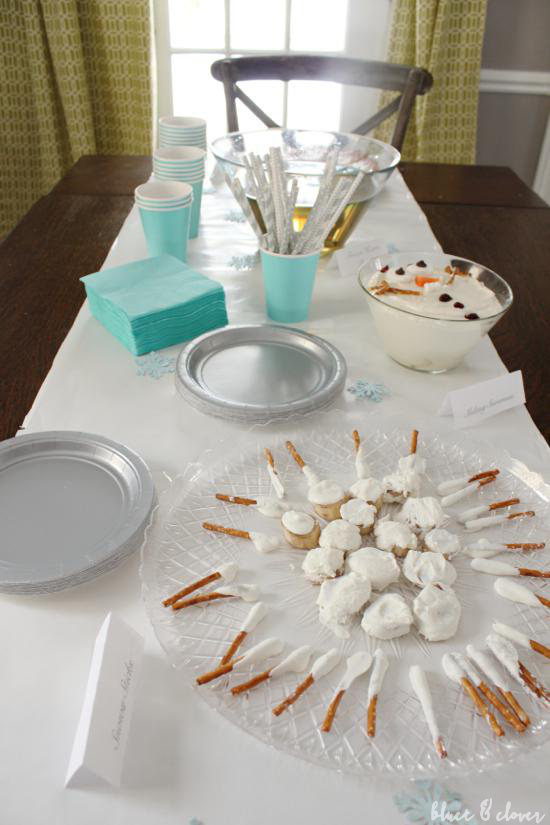 And there's the tassel garland. Hot. I think the sparkly silver drew them in. 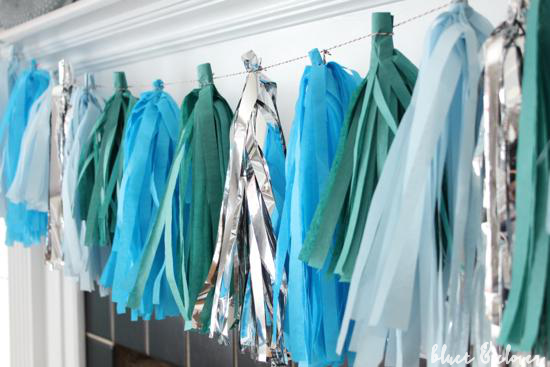 Goodie bags. Yet another way to use snowflake craft punches. The verdict is out, because they took these home with them to open up. I put in a bunch of blue, silver and white candy along with some other little party favors. I got everything at Party City which is a great place to buy color-specific candy and other party items. 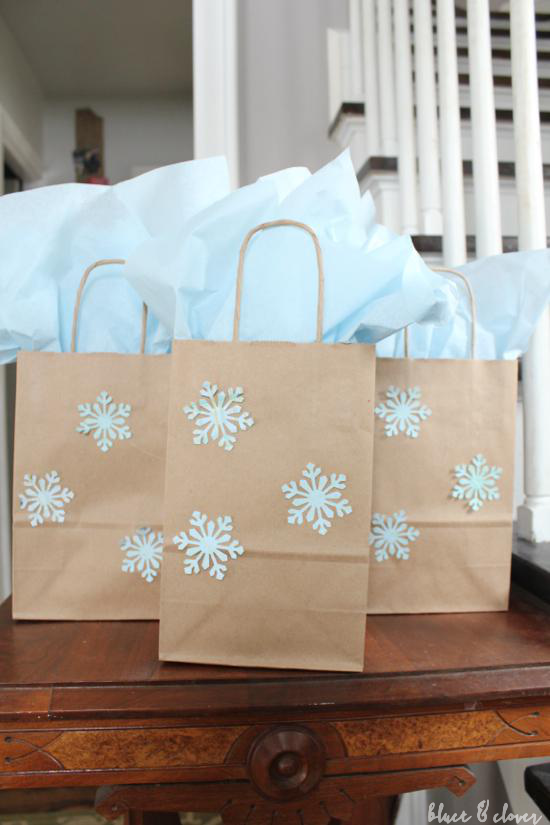 So there you have it. My honest critique of a Frozen-themed birthday party. While there were some misses at the food table, the kids had a blast running around, coloring and playing games. It was 2 hours of high-energy partying. To tell you the truth, I have to give the kids most of the credit for making the party a success. They really do invent their own fun. Oh to be 6 again.
Labels: DIY kids paper parties projects